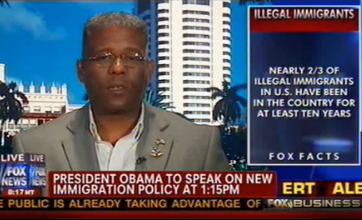 On Friday morning, President Barack Obama announced an executive order to cease the deportation of young immigrants who arrived in America before age 16 and allow them to apply for work permits so long as they have no criminal history and meet other criteria. In response, Congressman Allen West (R-FL) told Fox News that he sees this as a possible “backdoor” opportunity for the White House to eventually allow undocumented immigrants to vote.

The congressman told Martha MacCallum that the president’s executive order “shows that we are getting away from government that is based upon the consent of the American people, and we’re starting to live under a rule by edict or executive order.”

“What is going to happen as far as their right to vote?” West continued. “Is this one of those backdoor opportunities to allow people in the next five months to get the opportunity to vote? Will we see Janet Napolitano and the president come out with a new edict that says since we allow these people to be here legally, we’re now going to allow them to vote? How far down the rabbit whole will it go?”

MacCallum said that the Latino vote could prove important for November’s presidential election, and this discussion could influence the vote towards Obama. West agreed, adding that ”

The congressman added: “I would be very interested to know how close the [Hispanic civil rights] are groups like LULAC and [National Council of] La Raza to this decision that’s being made and what impact they had on this executive order and how it’s going to be handed out today. … Why have we not allowed a national debate on this issue?”