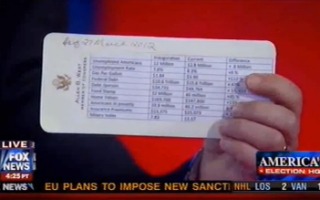 Florida Congressman Allen West visited Fox & Friends Monday morning, where he spoke with host Brian Kilmeade about a number of topics, including the possible risks that come with the FBI’s revised training manual, from which hundreds of pages have been removed because, as Kilmeade explained, some found them to be “offensive.”

Rep. West explained that our security system is becoming “vanilla” due to concerns over political correctness:

I think we have to understand when tolerance becomes a one-way street, it will lead to cultural suicide and we should not allow the Muslim Brotherhood-associated groups to be influencing our national security. […] When you go and look at the Ft. Hood report of Major Malik Nidal Hasan, you will find that it makes no reference to Islamic Jihadism, Muslim extremism and doesn’t talk about his association with al-Awlaki and it’s classified as “workplace violence.” […] We’re making our security situation so vanilla. If we continue to be recalcitrant in identifying who the enemy is to be less offensive to them, then we’re going to put ourselves in a bad situation.

“Look, it’s about trend analysis,” West said. “It’s not about profiling. It’s about looking at pieces of information and pulling it together.”

Later, when talk turned to presumptive GOP nominee Mitt Romney‘s chances this election, West pulled a card out of his jacket pocket. That’s right — Rep. West carries around a card listing the “top ten indicators.” He updates it monthly:

One of the things I care about, Brian, and I’ll share it to you, is a top 10 indicators card. And what Governor Romney has to do is take those top 10 indicators, and you evaluate it from inauguration day to where we are today. I update it every month, You have to make the contrast, you have to go on offense, you have say this is where the President specifically is failing. And I think when you make that case… For instance, today, if Mitt Romney were to talk about the fact that you have state-controlled oil and gas companies that are going to cut off that supply going to Israel… Well, a year ago, the President got involved and said Hosni Mubarak will have to step down. We were talking about the effect of the Muslim Brotherhood taking over there, some of the ramifications, and you started to see that. They’re running somebody for president. They’re cutting off relations with Israel in many different ways. They threatened the United States of America if we didn’t supply that 1.5 million dollars in aid. Along the lines of economic security, national security and energy security, Governor Romney has to make that contrast.

West also warned Romney against pandering to demographics, like Latinos, and appearing too much “like a politician” in the process. He then added that he would be “very surprised” if Romney’s people tapped him to be the nominee’s VP running mate.