Allen West: Person Responsible For Libya ‘Cover-Up’ Will Be ‘Fired’ On Nov. 6th 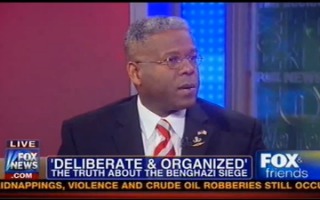 Florida congressman Allen West stopped by Fox & Friends‘ curvy couch on Monday, where he said that President Obama is complicit in trying the attacks in Benghazi to the anti-Islam film Innocence of Muslims. The Obama administration, he continued, simply does not want its foreign policy to be regarded as a “failure.”

West later added that there has “without a doubt” been a cover-up by the White House.

“When you look at the fact,” he said, “five or six days afterward, you had Susan Rice going on all of these talk shows, Sunday talk shows, with the same line: ‘It’s the video; it’s spontaneous.’ First of all, why is the American ambassador talking about embassies and consulates? Because that’s not her line of expertise. And for her to talk about coordinated attacks, you know, she is not a member of the Department of Defense. It should have been a State Department person, Hillary Clinton, or it should have been Leon Panetta.” Rice was ultimately chosen to talk about the attacks, he added, because she drew “the short straw.”

As for whether someone should be fired over the White House’s handling of the fatal attacks in Libya, West said that, on November 6th, the person responsible will indeed be kicked to be curb.

The show’s hosts then played a clip of West’s new political ad highlighting his opponent Patrick Murphy’s prior arrest on South Beach. West explained that it was necessary to “draw a contrast” between the two candidates, adding that Mitt Romney will do well to do the same. West then brought up a Super PAC ad showing a cartoon version of the congressman striking a woman and wearing a gold tooth. As you can see, he said, “I don’t have one.”