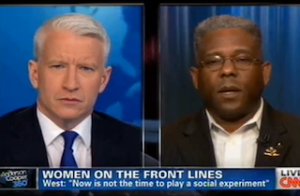 Former Republican Congressman and Army veteran Allen West made his views about the recent decision to allow women to serve in combat roles known this morning on Twitter and Facebook. And tonight, he brought those views to CNN.

Appearing on Anderson Cooper 360 along with retired General Rick Hillier of the Canadian Forces, West laid out his opposition to the new rule, saying that with all of the budget issues the military is having right now, the focus shouldn’t be on “this foray into an inequality trip.”

West then went off into an extended sports metaphor that seemed to have both Anderson Cooper and General Hillier baffled:

“I have to tell you, if this is the case, then why do we have separate hockey leagues? Women should be out there playing ice hockey with the guys in the NHL. We should not have a WNBA. I can’t shoot a three-pointer, but there are ladies who could certainly take me to the hoop. Maybe they should be competing with Kobe Bryant.”

Cooper quickly steered the conversation back to the more practical concerns surrounding women in combat, asking Hillier if he had seen any advantages in his career working with women in combat.

After attempting to dissuade some of West’s concerns, Hillier explained that “out in villages amongst the population of Afghanistan, our male soldiers simply could not speak to the females that were in the area.” He continued, “Our female soldiers could talk to them, could obtain all kinds of information, sometimes very actionable intelligence. They could do things that male soldiers simply couldn’t do because they were females and at the same time, they could do everything else that we asked them.”

But West could not be swayed, once again launching into his list of concerns and question regarding women’s ability to serve in the same roles as men. In the end, Hillier concluded that Canada’s decision to allow women to serve in combat in 1989 “was one of the most incredible things we could have ever done. Absolutely right, absolutely positive.”