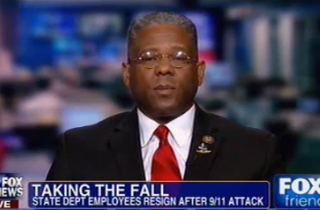 Appearing on Fox & Friends this morning, outgoing Rep. Allen West (R-FL) snarked that Secretary of State Hillary Clinton seems to have caught “Benghazi flu” on the day she was originally scheduled to testify before Congress about the deadly terrorist attacks on the U.S. consulate in Benghazi.

Clinton’s office previously announced she would miss her originally scheduled testimony due to fainting and suffering a concussion.

“I’m not a doctor, but it seems as though the Secretary of State has come down with a case of ‘Benghazi flu,’” West told host Gretchen Carlson. “I think we have to get to the bottom of this. There’s still a very countless amount of unanswered questions.”

West is one of many conservative figures who have publicly doubted the severity of Clinton’s injuries, snarking that she is conveniently missing her scheduled testimony for an untreated concussion.

“Just because we see the resignations of these bureaucrats, I find it very interesting that some of those were the ones who testified before the government oversight committee, that does not mean that this ends,” West continued. “I don’t think that this should become the new normal and the next thing you know, four years from now, we have Hillary Clinton running for president when we had this death of the ambassador, two former Navy SEALs, and a foreign service officer.”

Yesterday afternoon, however, Clinton’s chief of staff told Fox News that Clinton will testify before the congressional panel in an open session “before mid-January.”