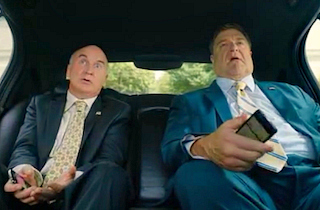 Alpha House—Amazon Prime’s inaugural original series, the first three episodes of which you can stream for free—unfurls one of the more intriguing premises in recent memory: based on an article in the New York Times about four Democrats who split a house in D.C. in the mid-oughts, the show joins four hapless Republican senators under one District roof. What, besides indictments, could go wrong?

The spectrum of modern political television ranges from the carbonated earnestness of The West Wing to the toxic cynicism of rival Netflix’s House of Cards. Alpha House, written and created by Garry Trudeau and starring John Goodman, veers joyfully towards the latter. Goodman plays Senator Gil John Biggs (R-SC), a consonant-munchin’ sumbitch who’s not 100% sure he’s on the Ethics Committee; Clark Johnson is Robert Bettencourt (R-PA), hop-scotching over a grand jury investigation; and Matt Malloy is Louis Laffer (R-NV), a Louis Gohmert-esque homunculus, who, from the moment he receives a phallic-shaped anti-sodomy trophy from a religious right organization, provides the show with endless closeted-gay-Republican gags.

When their fourth is snatched from the house one morning after forgetting to turn himself in to the Justice Department—remember that the next time your roommie doesn’t buy toilet paper—the three draft a freshman Senator from Florida (Mark Consuelos, doing a slimy Marco Rubio), who brings his mistress (Yara Martinez) along with him. Things get dire when Biggs’ effortless reelection is imperiled by a sudden primary challenge from a popular basketball coach, while Laffer gets a tea party opponent who accuses him of being a little girly-man. With Biggs needing a dose of PR, Laffer trying to prove his testicular fortitude, Bettencourt wanting to highlight his private contractor contributors, and Consuelos and his Saks-shopping girlfriend along for the ride, they set off to Afghanistan in what one of them openly acknowledges is “pulling a John McCain.”

The show gets some obvious play out the shared-living space set-up—Consuelos and Martinez have such emphatic sex that they knock over Laffey’s framed Nixon photo, and inevitably we walk in on a naked John Goodman. (“Every morning from 8:00 to 8:20, I nap in the shower!”) But for a show based on such a fertile setting, it doesn’t seem too eager to stay there. In the first episode, a filibuster keeps the senators sleeping in their chambers, and then they haul off to Afghanistan. They spend little time acting as roommates, and a lot as self-interested colleagues—not the worst contrivance for a comedy, but also plowed territory.

As a result, the humor is present, but not too frequent and a tad heavy-handed. Part of this may be the odd translation of Trudeau’s satirical style from comic strip to serial series. Doonesbury, especially in its early-70s heyday, was funny for a bucket of reasons, but when it widened its scope to the Nixon administration and then each successive White House occupant, it succeeded primarily through a wicked reduction of symbols: Dan Quayle as a feather or Bill Clinton as a waffle was comedic essentialism, a boiling down of complex figures to their most compromising element:

Even the static use of the White House facade, rather than the actual figures, when discussing events like Watergate served to simultaneously mock the absurdity of the misbehavior while reminding the reader that these abuses were occurring in the world’s most powerful building, and shouldn’t ever be as funny as he was making it:

The force of simple symbols has clearly stayed with Trudeau. Four decades separate the following two images; has anybody ever gotten as much mileage out of a helmet? 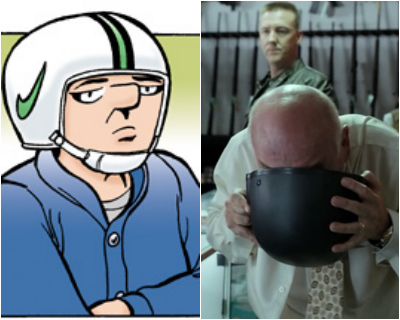 This is an aesthetic of extreme concision, and it worked perfectly in a four-panel strip. It’s less rewarding when stretched out over multiple twenty-two minute episodes, each requiring dynamic narrative arcs, simultaneity, ambivalence. It’s not that the characters are unfunny, they’re just funny in the same way, again and again. Gil John (based in part on Fred Thompson) is a drunk southerner who’d rather watch Duke than chair a committee. How many gags can even the uber-talented John Goodman make from that?

These are just the first three episodes, and a last-minute cliffhanger suggests that the plot does indeed thicken. I hope so, as there’s enough going for this series to root for its improvement. Until then, the funniest scenes so far will have come courtesy one Stephen Colbert, whose ironic, protean schtick is the polar opposite of Trudeau’s fixed icons. Maybe those two should be roommates.

[Image via Kleefield on Comics, Wikipedia]