Alternate Juror In Zimmerman Case Speaks Out On Fox: Not Guilty Verdict Was The Right Call
video

Alternate Juror In Zimmerman Case Speaks Out On Fox: Not Guilty Verdict Was The Right Call 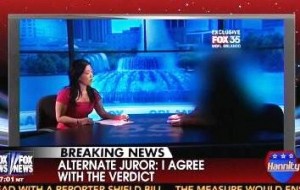 With five of the actual jurors in the George Zimmerman already weighing in to various degrees on their not guilty verdict, the media needs a fresh perspective for this thing. And just in time, Fox35 got an exclusive interview with another shadowy juror involved in the case. The twist this time? He’s an alternate juror. In an interview segment shown by Sean Hannity tonight, anonymous juror E54 said he completely agrees with the verdict, briefly expressing his disappointment that he wasn’t on the actual jury that ruled.

Fox35’s Valerie Boey asked the alternate juror about what evidence stuck out to him. He cited the emergency call Zimmerman made, Rachel Jeantel‘s testimony, and the injuries Zimmerman sustained. He found the testimony of who was on top in the fight to be incredibly relevant, and admitted that he found Jeantel to be a credible witness.

He couldn’t say for sure who was shouting on the 911 call, but based on testimony believed it was Zimmerman. He admitted he doesn’t understand why the Justice Department is considering a civil rights complaint, and admitted he would have liked to have been on the jury that found Zimmerman not guilty.

After showing the clip, Hannity brought Boey on to commend her for the interview. She further explained that this anonymous alternate juror believes, unlike the other anonymous juror who emerged this week, that Zimmerman shouldn’t have had to go back to his car, and was perfectly within his rights to stay where he wanted.