‘America Is Hated Around The World’ Because Of Obama’s Foreign Policy, Ahmadinejad Tells Fareed Zakaria
video

‘America Is Hated Around The World’ Because Of Obama’s Foreign Policy, Ahmadinejad Tells Fareed Zakaria 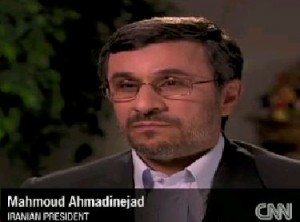 Ahmadinejad criticized NATO’s intervention in the Libyan conflict. “In the beginning, we recommended a dialogue between the two sides and all parties, but they did not pay attention to our recommendations. And, of course, NATO intervention was effective in exacerbating the conflict. We have not received any statistics about the losses from both sides and I think instead of intervention, NATO could help to promote a dialogue among all parties.”

Ahmadinejad reserved most of his vitriol in slamming American foreign policy.

“But we sympathize with all people of the world,” Amadinejad continued. “We say, ‘Why Afghans should be killed? Why American soldiers should lose their lives? Why they should spend so much money for killing people instead of using the money for development?’ That is very simple. Maybe the U.S. administration does not accept that. But believe me, continuation of these policies are going to lead to the collapse of the U.S. empire. And it is against the interests of the people of the United States.”

Watch Ahmadinejad’s interview with Zakaria below via CNN: