American Idiots: Who Is Really To Blame For Republican Election-Rigging Schemes?
video

American Idiots: Who Is Really To Blame For Republican Election-Rigging Schemes?

One of the key ways that MSNBC has distinguished itself from the cable news competition has been the relentless effort, by many of the network’s stars, to shine a light on Republican schemes to rig elections in their favor, and in defiance of the will of the People (as in We the People). The latest of these schemes, to allocate several states’ electoral college votes by congressional district, has quickly graduated from MSNBC hobby-horse to national news story, but like their earlier, laudable coverage of Republican dirty tricks, MSNBC stalwarts like Rachel Maddow rarely drive home the most important lesson from this issue.

Beginning with Ed Schultz‘s coverage of the anti-union overreach in Wisconsin, which Rachel Maddow consistently linked with an effort to kneecap the Democratic Party’s most reliable way to try and level the big money playing field, MSNBC has been first, and best, in covering Republican voter suppression scams like voter I.D., reduction of early voting, and now, a movement to allocate electoral votes in a way that would have turned President Obama‘s five million-plus popular vote victory into an electoral college route. In one of many recent segments, by a variety of MSNBC hosts, Rachel Maddow explains:

Now, I am not remotely criticizing Rachel’s focus on the sick, anti-democratic nature of what Republicans are doing, especially as it relates to State Sen. Henry Marsh. Not only did the Virginia State Senate exploit Sen. Marsh’s absence due to President Obama’s historic second inauguration, on Martin Luther King Day, they adjourned their session that day in honor of Confederate Gen. Stonewall Jackson. In fact, it’s tough to argue that enough disinfectant exists to pour onto the fetid sores of Republican voter suppression efforts, and indeed, the progressive media’s laudable focus on this issue appears to have helped turn out the voters who care about these issues. Thankfully, that focus appears to have taken some of the wind out of this most recent movement’s sails, although it still carries the national Republican Party’s seal of approval.

To all of this, I say “Keep up the good work,” but someone has to ask the obvious questions that arise when watching coverage of this issue. If people really don’t want their votes suppressed, people in states which voted for Barack Obama twice, if the American people really wanted a Democratic House of Representatives by more than a million votes, then how is it that Republicans are even in a position to do any of this? What do these states have in common? 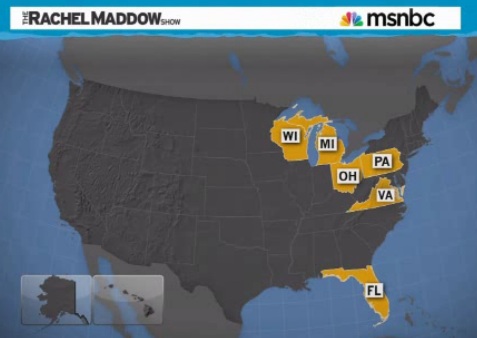 Obviously, they all have Republican governors, and Republican state legislatures, but how did they get that way? Virginia Governor Bob McDonnell was elected in 2009, while Governors John Kasich (R-OH), Rick Scott (R-FL), Rick Snyder (R-MI), Tom Corbett (R-PA), and Scott Walker (R-WI) were all elected in 2010. With the exception of Florida’s Rick Scott, all of them succeeded Democratic governors, although Scott predecessor Charlie Crist is now a Democrat. Again, with the exception of Florida, all of these states had at least one Democratically-controlled legislative chamber in 2008, when then-Sen. Barack Obama was elected, and all have flipped to complete Republican control since then. What is wrong with the people in  these states? Can’t they make up their minds?

As it turns out, a lot of them did make up their minds… to stay home. When Bob McDonnell took the Virginia Governor’s Mansion in 2009, only 40% of eligible Virginia voters showed up to vote, versus the 67% who turned out in 2008, and the 66.4% who turned out in 2012. More than a third of the voters who put Barack Obama in the White House, and kept him there, stayed home for Virginia’s gubernatorial election.

This pattern played out across the country, where average turnout was 41.7% in 2010, and Republicans took over the U.S. House of Representatives, and gained control of most state legislatures. Heading into 2010, Democrats controlled 28 state senate chambers and 32 lower chambers. Now, Republicans control 28 state senates and 31 state houses. Those victories allowed Republicans to redraw Congressional districts to their advantage, which is why, despite voting for Democrats by a million-vote margin, you now have a 33-seat Republican majority in the House of Representatives.

That’s right, America, Republicans are now in a position to suppress your votes because you suppressed your own votes in 2010, and it’s not like nobody warned you. While Republicans deserve every bit of the attention they’re getting for trying to cheat you out of your vote, someone needs to remind you that, at a very basic level, this is all your fault. Please don’t do it again.