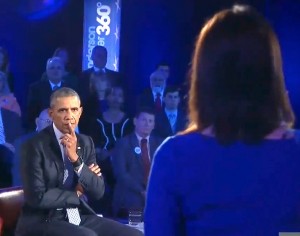 At Thursday night’s CNN-hosted town hall meeting with President Obama, Guns in America, the widow of American Sniper Chris Kyle was first to ask the President a question, and in doing so exposed one of the many logical fallacies that extreme gun advocates operate under. Taya Kyle began by praising the President for his message of hope, but pivoted to wondering why, instead of proposing measures to prevent gun violence, he doesn’t instead offer hope by telling people how much the murder rate has gone down.

Along the way, though, Mrs. Kyle perhaps misspoke when she told the President that “We can’t outlaw murder”:

“I appreciate the time taking to come here, and I think your message of hope is something I agree with, and I think it’s great and I think that by creating new laws, you do give people hope. The thing is that the laws that we create don’t stop these horrific things from happening, right and that’s a very tough pill to swallow. We want to think we can make a law and people will follow i, butt by the very nature of their crimes they are not following it. By the very nature of looking at the people who hurt our loved ones here, I don’t know any of them would have been stopped by the background check and yet, I crave that desire for hope, too. Part of it is we have to recognize that we cannot outlaw murder, because the people who are murdering, right, are — they are breaking the law but they also don’t have a moral code that we have, so they could do the same amount of damage with a pipe bomb.”

Mrs. Kyle went on to suggest that overburdened law enforcement authorities devote resources to prosecuting people who lie on applications, another popular NRA smokescreen, but it is her assertion that “we cannot outlaw murder” that best points up the flawed logic of gun regulation opponents, that because criminals break laws, then we shouldn’t bother making any.

But the town hall itself also exposed the flaw in the current “common sense” nibbling at gun regulation, exemplified by the substantively weak executive actions the President announced this week. Over and over again, the President had to assure people at this town hall that the measures he announced, and even the ones he couldn’t get passed after Newtown, don’t really do much of anything. In order to really tackle this problem, there needs to be a fundamentally different approach to the issue that our politics are nowhere near.