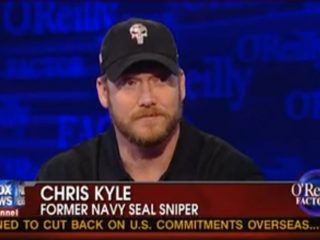 Navy SEAL Chris Kyle is, almost without a doubt, the single most interesting person to appear on cable news in some time. With 150 kills in his pocket, he is America’s most lethal sniper, and he has quite the number of stories to tell. On tonight’s O’Reilly Factor, he told Bill O’Reilly how he rationalized killing these terrorists individually, his only regrets, and the story of when he had to knock out Jesse Ventura.

Kyle, whose memoir, American Sniper, was recently released, was initially asked about the Ventura incident. Apparently, the wrestler (also a SEAL) was at a bar in 2006 when he began “badmouthing the [Iraq] war, badmouthing Bush, badmouthing America.” Kyle told him to stop upsetting family members of a recently killed SEAL and Ventura responded, “ya’ll deserve to lose a few guys.” He knocked Ventura out cold and “took off running.”

The interview got significantly more gripping after the warm-up chat, as Kyle explained why he referred to Iraqi kills as “savages” for what they did to civilians in their own villages, for hanging and other tortures. He said he had no qualms about killing “to protect my fellow Americans… it’s not a problem taking out someone who wants your people dead.”

As for any regrets, Kyle had no problem with the kills themselves, but did have regrets: “the people who I couldn’t save… the Americans, the Iraqis.” He told O’Reilly that “war is hell” and that civilian Americans are given a fairly sugarcoated depiction of war from the media. “Hollywood fantasized about it, makes it look good,” he explained, and in his line of work, “you cannot think of [the enemy] as human beings.”

The full moving interview via Fox News below: