Amy Holmes: Only Person Fired Over Obamacare ‘Fiasco’ Was Operator Who Told Hannity the ‘Truth’
video

Amy Holmes: Only Person Fired Over Obamacare ‘Fiasco’ Was Operator Who Told Hannity the ‘Truth’ 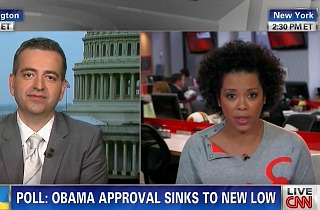 During a CNN segment on Thursday, The Blaze anchor Amy Holmes tore into President Barack Obama’s administration and the lack of accountability. She said that the administration has failed to enforce any culpability for the problematic roll-out of the Affordable Care Act. Holmes added that the only person who has lost their job over this “fiasco” is a health care telephone operator who happened to tell Fox News host Sean Hannity the truth about the consistently failing HeatlhCare.Gov website.

Democratic strategist Chris Kofinis began the segment by noting that the ACA roll-out has been problematic, but that those tasked with fixing the failing website should be allowed to finish their work. If, however, the site is not fixed by the beginning of 2014, Kofinis said that Health and Human Services Sec. Kathleen Sebelius should resign.

RELATED: Hannity to F&F: Why Was Obamacare Hotline Operator Fired, But Sebelius Still Has a Job?

CNN anchor Brooke Baldwin turned to Holmes and asked about recent polling that shows that GOP’s popularity is at an all-time low. Holmes said that the party did itself no favors by shutting down the government, and it also drew attention away from what she called the “fiasco” and the “disaster” that is the ACA roll-out.

“So far, the only person, the only person who has been fired with this fiasco is a 1-800 operator who told Sean Hannity the truth, which is that nobody liked the HealthCare.Gov website,” Holmes said.

“It seems like accountability is a totally empty, meaningless phrase,” she concluded.