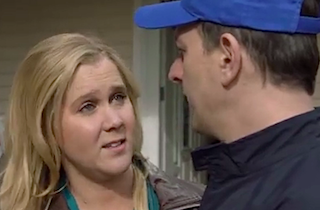 The highly-anticipated third season of Inside Amy Schumer premiered last night and at its center was the type of slyly feminist sketch that has helped make Amy Schumer into the simultaneously wildly popular and often controversial comedian she is. Titled “Football Town Nights,” the Friday Night Lights parody features Josh Charles as a Coach Taylor stand-in who has one big rule for his players: “No raping.”

Most of the sketch is made up of the high school students desperately trying to find loopholes or excuses. “No raping?” one player asks. “But Coach, we play football!”

“What if she thinks it’s rape, but I don’t?” someone wonders. “What if my mom is the D.A. and won’t prosecute, can I rape?” another wants to know.

Despite pushback from adults in the town, the coach ultimately wins over his players, bringing them together with a perfectly tweaked version of Friday Night Lights’ catchphrase: “Clear Eyes, Full Hearts, Don’t Rape.”

According to Inside Amy Schumer writer Christine Nangle, who also wrote last season’s take on rape in the military, the sketch was inspired by the Steubenville rape case, which stemmed from a 2012 incident involving high school football players.

“I just remember getting so sickened by it that, and by the fact that it wasn’t a bigger story. I just remember sitting there thinking: there’s got to be a way into this, sketch-wise,” Nangle told ThinkProgress on Wednesday. “You know that laugh you do when you cannot believe that people are this ridiculous and cruel?”