An Obama Gaffe That Actually Matters: ‘The Private Sector Is Doing Fine’ (With Obama Response)
VIDEO

An Obama Gaffe That Actually Matters: ‘The Private Sector Is Doing Fine’ (With Obama Response) 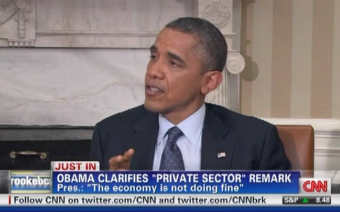 Forget “57 states,” “corpse-men,” accidental oral sex jokes, or the other Obama gaffes we pointed out earlier this week. During Friday morning’s economic press conference, President Barack Obama made a gaffe that actually matters. While speaking about the American economy’s slow recovery, the president said that “the private sector is doing fine.”

A White House reporter asked the president following his speech, “What about the Republicans saying that you’re blaming the Europeans for the failures of your own policies?”

We’ve created 4.3 million jobs over the last 27 months; over 800,000 just this year alone. The private sector is doing fine.

There are many things to be said about this boneheaded comment, but it was most succinctly said by Reason‘s Nick Gillespie: “Yes, the private sector is doing fine, if by fine you mean pretty goddamned awful.”

So with President Obama’s head firmly planted in the sand, who then does he believe is suffering from the weak economy?

Oh, right. So in a nutshell: our economy is weak because we don’t send enough federal dollars to the states for make-work projects and unfunded programs; and not at all because of burdensome rules (often written with help from Big Business) that squash private competition? Not because of government deficits that crowd out private investment? Not because of a general uncertainty in the business environment that stunts private growth?

If Republicans want to be helpful, if they really want to move forward and put people back to work, what they should be thinking about is how do we help state and local governments and how do we help the construction industry? Because the recipes that they’re promoting are basically the kinds of policies that would add weakness to the — to the economy, would result in further layoffs, would not provide relief in the housing market, and would result, I think most economists estimate, in lower growth and fewer jobs, not more.

I turn this softball over, once again, to Gillespie — like me, far from a GOP apologist — who wrote: “How might GOP legislators help state and local governments? I don’t know, maybe by not saddling those jurisdictions with massive unfunded liabilities and partly funded liabilities (Medicaid, ObamaCare)? If Obama’s stimulus – packed with more “shovel-ready” construction jobs than a Snickers bar is with peanuts – didn’t jumpstart the building trades (and it didn’t), maybe it’s best to give that a rest.”

Check out the offending Obama remark below, via CNN:

After the president’s gaffe, the Mitt Romney campaign seized upon the remark, calling the president “out-of-touch.”

And now President Obama has responded to Romney, saying he did not misspeak:

The economy is not doing fine. There are too many people out of work. The housing market is still weak, there are too many homes underwater. And that’s precisely why I asked Congress to start taking some steps that can make a difference. Now I think if you look at what I said this morning, and what I’ve been saying consistently over the last year, we’ve actually seen some good momentum in the private sector.

Check out his response below, via CNN: