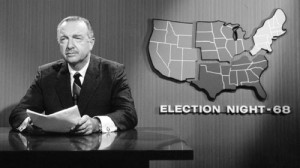 News legend and cultural icon Walter Cronkite has died at the age of 92. Once known as “the most trusted man in America” Cronkite anchored the CBS Evening News from 1962 to 1981 with his trademark sign-off, “And that’s the way it is…”LA Times Critic Robert Lloyd has a terrfic appreciation, that is summed up thusly:

The rolling rise and fall of his voice and the rhythms and pauses he built into his prose gave his reporting the subtle weight of blank verse. Cronkite cut his teeth telling stories in print and over the radio; he knew how to make pictures from words. Similarly trained reporters dominated TV news for the medium’s first decades; it was an oratorical era. But as they aged and retired, the networks turned to more telegenic models, to prettier people and — reasonably enough — a more visual approach to the news.

Network news anchors still aim for that mix of eloquence and authority that Cronkite embodied, but they compete, at a disadvantage, with the noise of an ascendant punditocracy and the mountain-from-molehill nattering of cable news organizations that live on crises — it’s not the old voice of reassuring honesty that they cultivate, but one of perpetual anxiety. There are many more rooms in the mansion that is television news nowadays, but they have grown proportionately smaller; they are no longer fit for giants.

Here is a video of Cronkite talking about his coverage of the Apollo moon landing, which took place 40 years ago this Monday. Cronkite called it the most important story of the 20th Century.