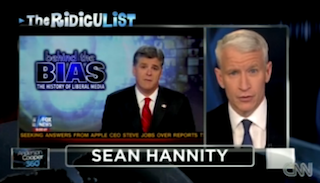 Last Friday, Fox News aired an hour-long and heavily promoted special in which Sean Hannity exposed the liberal bias in the media (finally!). It was filled with examples of news people appearing to report on different news stories through a liberal filter. However, at least one of those examples was kind of BS. A clip that seemed to show Anderson Cooper talking about a “Bush Administration smear campaign” in the Valerie Plame outing. However, as Cooper showed on CNN last night, had Hannity played the full clip, it would have become clear that Cooper was only quoting someone else’s accusations objectively, not accusing the Bush White House himself.

God, it’s almost as if the documentary exposing liberal bias was put together with some kind of a…ah, what’s the word I’m looking for? You know, it’s like “prejudice” but not really. I think it starts with a “B.” Damn! What is it?

Cooper, for his part, was incredibly forgiving in the correction. Or, at least, as forgiving as you can be when you’re reporting on a peer in a segment with the silly name “The RidicuList.” He repeatedly promised that he wasn’t attempting to start a “cheesy cable news feud.” Too bad.

Cooper summed it up thusly:

“I try to choose my words very carefully and I don’t like it when someone cuts around them to make it seem like I’m saying something that I’m not. I’m going to assume that Mr. Hannity had no idea what his editors were up to. I would hate to think that he would knowingly falsely edit something to make a point. After all, that would be biased.”

There we go! That’s the word I was looking for! “Editors!” The documentary was clearly put together with editors.

Man, I was way off thinking it started with a “B.”