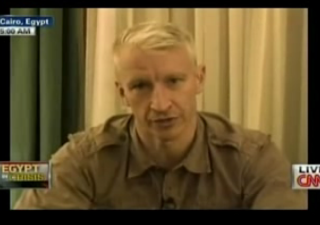 Anderson Cooper is not a rookie journalist when it comes to dangerous situations, but it’s difficult to remember a time in which he has faced more personal danger than during his coverage of the Egyptian revolts. Reporting from an undisclosed location in Cairo tonight, Cooper gave an update on the situation on the ground to the best of his ability– apologizing for reporting from a dimly-lit room, admitting some fear, and explaining that the media in Cairo is being systematically shut down.

Cooper, speaking live via what appeared to be a computer, reported that his only method of broadcast at the moment was from the room he occupied, an “undisclosed location,” the anonymity of which was, “frankly, for our own safety.” Acknowledging that the physical attacks on him had made headlines this week, he admitted that “journalists don’t like to become part of the story, but unfortunately, they have been made part of the story.”

He then detailed the situation regarding actual broadcasting. While he noted that Tahrir Square was currently full of protesters, many of them, he predicted, “scared for their lives,” there were no live cameras allowed on the ground, and absolutely no way of broadcasting live from the area. Their cameras, he explained, were “systematically taken down.” He did not exclude himself from the national climate of fear, either. “I don’t mind telling you I’m a little bit scared,” he admitted, though he noted that “there’s a lot of people who are scared right now in Egypt,” likely more than he is.

Cooper appeared entirely genuine in his fear, and his broadcast, somber and surprisingly collected for the situation, provided a chilling reflection of the current state of the nation through the eyes of what amounted to a blindfolded journalist– but one still able to speak. The report via CNN below: