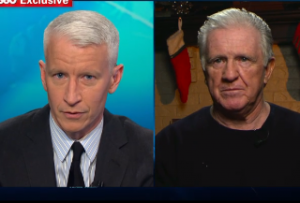 The psychologist behind the controversial “affluenza” diagnosis of a Texas teenager whose actions resulted in the deaths of four people spoke out on CNN last night, defending himself to Anderson Cooper. Dick Miller admitted he shouldn’t have used that word to begin with, and he went back and forth with Cooper over the leniency of the sentence, the fun activities available at the rehab facility, and whether or not the teen in question actually “killed” anyone.

Cooper told Miller that the term other people generally use is “spoiled brat.” Miller argued that he always favors probation over the penitentiary no matter who it is or how much money they have. Cooper, then, found it odd that the facility the teen is being sent to includes activities like cooking classes, MMA, yoga, and equine therapy.

Miller repeatedly dismissed that as just “five percent of the program,” but Cooper found that to be just a wee bit too lavish for someone who’s deserves appropriate punishment for his crimes.

Cooper also brought up the case of a young black teen who killed one person received a much harsher sentence. Miller responded, “There are actually black people who have money, Anderson.”

But aside from the clashing over justice for the rich and black people with money, Cooper was somewhat stunned by Miller’s refusal to say the teen who killed four people while driving under the influence of alcohol meant he killed them.

At one point, Miller got so frustrated he kept pressing Cooper about what sentence he would like to see the teen get, and continued to defend the rehab facility, in slide of Cooper’s protestations over the horse therapy.

Watch part one of the full interview below, via CNN: