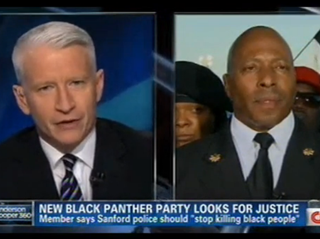 The New Black Panther Party: they exist, and they have somehow squeezed themselves into a corner of the Trayvon Martin tragedy, no matter how much no one else– particularly Martin’s parents– want them around. But they are calling for a “citizen’s arrest” of George Zimmerman and leader Minister Mikhail Muhammad spoke to Anderson Cooper today to try to explain just what his group was doing. In the process, he “indicted” Zimmerman with “1st degree murder” and accused Cooper of not “caring about the Martin family.”

“He committed murder, he committed a hate crime,” Muhammad told Cooper, explaining, “we decided to take it upon ourselves and coalition with other groups, with other black people who have had enough.” Cooper tried to explain two key faults in their plan: that Zimmerman hadn’t been charged with anything, and “Trayvon’s parents don’t want you.” Neither seemed to matter. “We are military, we are here to support Trayvon’s family,” Muhammad argued, bizarrely, later adding they weren’t really doing this for Trayvon Martin– “they have killed millions of black men and women so not only are we calling for justice for Trayvon.”

“You tell our justice department and Eric Holder and our President Obama to get off up their ass and do the work and the rest is done!” Muhammad argued, then trying to convince Cooper that “we can make a citizen’s arrest when the government will not do their job according to the Constitution.” “Factually… that doesn’t make any sense,” Cooper replied, but Muhammad wasn’t having it. “I don’t obey the white man’s law,” he replied, adding, “you don’t care about Trayvon’s family.”

“You have no idea what’s in my heart or my mind, or what I’ve been reporting,” Cooper replied politely, and asking him to explain why the Southern Poverty Law Center “says you’re a hate group.” The answer? “The white man cannot call anybody anti-Semitic, he is not Semitic, he is a racist, a murderer…” It was that kind of interview.