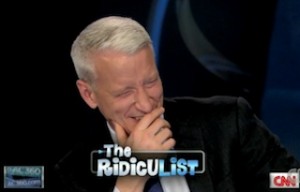 ‘The Ridiculist‘ is the recurring segment on AC360 in which host Anderson Cooper reports on the sublimely absurd stories of the day in a method that is often a bit more creative the straight coverage one usually sees on his show. For example last night it featured a report on the recent story of French actor Gerard Depardieu getting thrown off an Air France flight for allegedly urinating on the aisle carpet near the plane’s bathroom. Cooper reported this story with series of crafty puns that were not just funny to viewers, some were especially hilarious to the news reader himself — the face of the “most trusted name in news” — who could not control his laughter for a good thirty seconds.

For some odd reason, there is nothing as infectiously hilarious as watching someone try and fail to keep a straight face. In the comedy world, the term is called “breaking” (or “losing it”) and was pretty much pioneered by actor Harvey Kormon during The Carol Burnett Show (then later by Jimmy Fallon during his SNL days.)

The following clip is pretty great, and perfectly demonstrates both Cooper’s range and his likability. For all the stick Cooper occasionally gets about how his steely blue eyes are “a national treasure” and for the tight tee-shirts he wears in the areas of strife, at the end of the day, he doesn’t seem to take himself all that seriously. Viewers like him because he can one week be reporting on dying children in Somalia and the next be laughing over the silliest of peeing puns, and somehow, impossibly, his viewers can still relate.

Watch the clip below, courtesy of CNN.