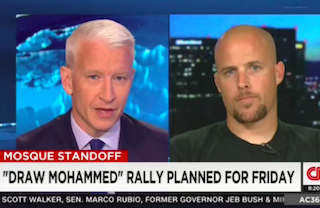 The Phoenix man behind an anti-Islam rally and yet another “Draw Muhammad” contest joined CNN’s Anderson Cooper Thursday night to explain why he is “encouraging hundreds of armed people to gather outside of a mosque during prayer service wearing t-shirts saying ‘f— Islam.'”

“I’m trying to achieve exposing Islam and that truth what is written in the Koran,” Jon Ritzheimer told Cooper, comparing himself to the signers of the Declaration of Independence because he doesn’t want to “live in fear.”

The former Marine had some trouble answering Cooper’s questions about how he justified defending an Islamic government in Iraq with his hatred for that religion. He said he doesn’t believe Americans serving in Afghanistan today are supporting terrorism but does believe that “true Islam is terrorism.”

Asked by Cooper if he is “playing into the narrative of ISIS, of Al Qaeda, which is basically trying to say there is a war between Islam and the West,” Ritzheimer replied, “Sure,” without elaboration. Moments later, he said, “I don’t believe in a war.”

“You don’t think bringing guns to a mosque while families are praying inside and wearing t-shirts that say ‘f— Islam’ and shouting whatever it is you’re going to shot at them, as they come and as they go, you don’t think that is promoting violence at all?” Cooper asked.

Ritzheimer would only say in response that he finds the cartoon contest “stupid and ridiculous, but it is what needs to take place in order to expose the true colors of Islam.”