Anderson Cooper Fires Back At Limbaugh: ‘You Might Try The Gym From Time To Time’
video

Anderson Cooper Fires Back At Limbaugh: ‘You Might Try The Gym From Time To Time’ 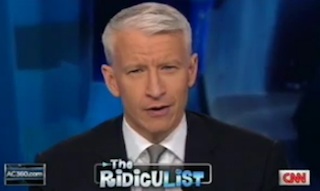 On Thursday night’s AC360, CNN’s Anderson Cooper used his RidicuList segment to offer a response to comments Rush Limbaugh made on his radio program this week. Limbaugh, you may recall, had told his listeners that “the silver fox” is “reported more in gossip columns to be at the gym or that bar or a restaurant than he is in the studio.”

“I don’t know if you noticed,” said Cooper, “but he spoke awhile and didn’t call me a slut even one time. I don’t have my Rush-to-English dictionary handy, but I’m pretty sure that means we’re best friends now. So he was talking about CNN’s ratings and yes, ratings go up and down, ratings go up and down… But can we play that part again where he’s reading about me in all these gossip columns?”

Cooper replayed Limbaugh’s comments about how the CNN anchor is always at “that bar.”

“So first of all, is there a place called ‘that bar’? I don’t even know where that is,” said Cooper.

RELATED: Limbaugh Unloads On Anderson Cooper: I Hear More About Him Being At The Bar Or Gym Than In The Studio

Look, I have no control over what gossip columnists write about me, but I can tell you I count on one hand the number of bars I have been to in the last year. I think Mr. Limbaugh is very talented at what he does. I’ve never tried to pick a fight with this guy, I have no interest in doing that now. But because I’m sure Mr. Limbaugh cares about accuracy, I just want to point out to him I have three jobs, and those jobs — they do kind of keep me busy.

I work long hours. I’m not complaining, I love it, but the idea I’m hanging out in bars and health clubs is, sadly, not true. I actually eat breakfast, lunch, and dinner in my office. The funny thing is, I had no idea that Rush Limbaugh was such an avid gossip enthusiast. Now, I don’t believe what I read in gossip pages, apparently Mr. Limbaugh does. I’ve heard an awful lot about him over the years, but I have no idea what’s true and what’s not and I wouldn’t spread gossip on my show about him. Apparently Mr. Limbaugh loves him some gossip columns. Who knew?

I will grant the following point, though, and I agree that this is some fantastically juicy gossip. So listen close. Stop the presses. I do go to the gym. I’m concerned about heart disease. I’ve raised money to fight heart disease. My dad died of it. And, yeah, I try to take care of myself. Mr. Limbaugh, I can only hope that you are taking care of yourself as well. You might try the gym from time to time.

Cooper gave Limbaugh a suggestion for the next time he goes to the gym.

“Most gyms have TVs, you can prop up reading material on the cardio equipment,” Cooper said. “So you can put, like, I don’t know, the National Enquirer right there on the elliptical, crank up the volume on Access Hollywood, and get your research done at the same time you’re improving your big heart.”

Watch Cooper’s response to Limbaugh below: