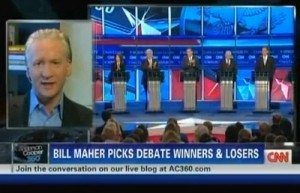 Anderson Cooper is a smart guy. He seems to know that his role in delivering news is to stay as unbiased as possible, even at the risk of sometimes being a tad bland. How, then, does Cooper host an entertaining news show? Invite on a fearless provocateur whose stock-in-trade is delivering barbed assaults on those whom he deems to be his intellectual inferiors, mostly those of the Republican stripe. Someone like Bill Maher, who, last night, ruthlessly blasted the Republican candidates on display during CNN’s GOP debate.

In the segment embedded below, Maher ruthlessly slammed nearly every GOP candidate who participated in the debate this week, and even found room to deride those who did not participate, calling Sarah Palin a “ditz,” for example. He did find time to laud Ron Paul to some degree, saying that he was the one candidate that he could get behind, but for the most part he mercilessly blasted, not just every other participant, but the entire affair.

Cooper is, without question, the face of CNN, a role which he seems not only relish and take seriously, but has earned him the respect of his peers. In fact, this site has often cited Cooper’s excellent reportage (particularly in areas of conflict and disaster) as well as his often smart and insightful segment called “Keeping Them Honest,” which regularly holds accountable false accounts or irresponsible hyperbole.

But should CNN really be that comfortable with the “face” of their network giving such an unchallenged platform to such a biased commentator? Wouldn’t it be more fair to at least have someone to rebut his point of view, or to add a different perspective? Put another way, how often has Cooper had on, as guest, Maher’s equivalent on the right, say his old pal Ann Coulter, who appears to take a similar approach to Maher’s in the business of outrage? Yes, we are aware that Coulter has appeared on AC360, but the tone of those discussions appear very different than the amused and convivial conversations that Cooper shares with Maher. Just keeping them honest.