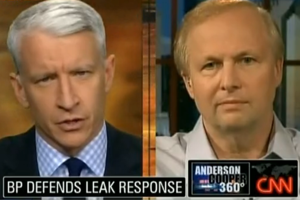 After weeks of declining to visit the program, BP sent managing director Bob Dudley to answer some of Anderson Cooper‘s questions on how much oil BP estimates is polluting the Gulf of Mexico at this point and what they are planning to do about it. Dudley invited Cooper and his team to visit the Gulf and see the BP engineering center for himself, but Cooper was skeptical, noting, “Apparently, when ABC news visited last week… you turned off the feeds so that they couldn’t see there was a live feed.”

Cooper divided his interview into a series of three sharp general questions: why is BP still using outdated figures of the amount of oil pouring out of the open well, why has BP not been more transparent about the work being done to clean it up, and why are they using dispersants that may be more toxic and less effective than other available means, according to the EPA?

Dudley called the 5,000 barrel per day figure “the best estimate,” noting that larger figures ranging from 70,000 to 100,000 barrels a day were “alarmist” and that measuring the amount of oil and gas coming out of the well was comparable to measuring the amount of soda coming out of a can that was shaken before opening. He also reassured Cooper on this front that there were people researching the oil plume and that BP had nothing to hide. In fact, he told Cooper, “I’m going to ask you to come down with your crews and visit the engineering center we have.” Rather than accept the invitation, Cooper challenged him on his transparency, asking why ABC News crews were not allowed to view a live feed of the leak.

In response to Cooper’s inquiries about the quality of dispersants being used to keep the oil at bay and what potential additional damage they could inflict on the Gulf, Dudley answered that he “can’t tell you the shades of gray” but that the dispersant chemicals were EPA approved and working as expected.