Anderson Cooper Had the ‘Loneliest, Most Pathetic’ 47th Birthday Yesterday 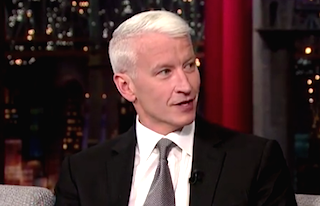 It was Anderson Cooper’s 47th birthday yesterday, and as he revealed in this preview from tonight’s Late Show, he celebrated it in perhaps the saddest way possible. The CNN anchor taped his show from Boston last night and then had to drive the five hours back to New York. On the way, he stopped at McDonald’s to have a solo birthday dinner by the side of the highway.

“I had a big mac meal #1, my favorite,” Cooper told David Letterman. “I super-sized it because it was my birthday.” He said he doesn’t eat at McDonald’s as much as he would like to because he’s concerned about his “ticker” but for him it’s a “big treat.”

“It was actually sad though,” Cooper said, because it was 11 p.m. at night and he was in the road stop by himself and he decided to tell the woman working there, who “could not have been any less interested” that it was his birthday. “And she looked at my like I was the loneliest, most pathetic person on the planet.”

Cooper did get a chance to celebrate his birthday at least a little bit on the air during last night’s “Ridiculist” segment on CNN. The anchor looked on as Jeffrey Toobin called him a “blue-eyed gazelle, albino with a crew cut” and Dr. Drew Pinsky got back at Cooper for that time he gave him the finger on air.