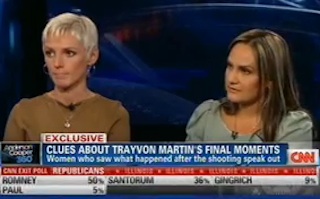 On Tuesday’s AC360, CNN’s Anderson Cooper spoke with two witnesses, Mary Cutcher and her roommate Selma Mora Lamilla, who were at the scene of the gated community, The Retreat at Twin Lakes in Sanford, Florida, the night Trayvon Martin was shot to death by George Zimmerman.

“We were in the kitchen, with the window open and the blinds pulled. So we had complete view from outside,” Cutcher explained.

Cooper asked her what was the first thing she saw.

“You heard the gunshot?” Cooper interjected.

“Yeah, I run away from my backyard and when I just get into the point of my — like my screen, it stopped me, I look at the person on his knees on top of a body,” Lamilla elaborated.

RELATED: Lawrence O’Donnell On Zimmerman 911 Tape: ‘I Believe What We Have Here Is Evidence Of A Police Cover-Up’

“So you saw Mr. Zimmerman on top of Trayvon Martin?” Cooper questioned.

“When you say on top of, how so?” the CNN anchor pressed.

“His legs were straddling him?” Cooper followed up.

“One on each side, on his knees, with his hands on his back. I immediately thought, okay, obviously if it’s the shooter, he would have ran,” Cutcher detailed. “I thought he’s holding the wound, helping the guy taking a pulse, making sure he’s okay. When she called to him three times, everything okay, what’s going on? Each time he looked back, didn’t say anything and then the third time he finally said, ‘just call the police.'”

“But at that time it was so dark,” Lamilla added. “I just saw this person. When she started calling the police, I saw Zimmerman walking with — touching like his hair, like kind of like confused back and forth to the body.”

Lamilla and Cutcher described Zimmerman pacing around the body, following the shooting, and disputed that there was any indication of a fight.

Watch the two witnesses describe the scene of Martin’s shooting below via CNN: