Anderson Cooper On Coming Out: ‘I Think Visibility Is Important’ 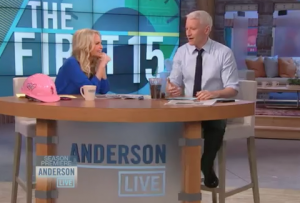 Spurred by guest co-host Kristin Chenoweth, Anderson Cooper, on his daytime talk show, discussed his decision to publicly tell us, “The fact is, I’m gay.” Noting that he’s always been open with his family and friends, Cooper he’d chosen to stay private “because as a reporter I didn’t think it was appropriate.” But in the end, he decided he didn’t want to send the message that it was something he wasn’t comfortable with.

Earlier this summer, Cooper made official that he’s gay in an email to The Daily Beast’s Andrew Sullivan, which Sullivan, with Cooper’s permission, published on his blog. In the email, Cooper noted “there is value in standing up and being counted.” While in a perfect world, the issue would be private, Cooper acknowledged the importance of visibility. He went on to state, “The fact is, I’m gay, always have been, always will be, and I couldn’t be any more happy, comfortable with myself, and proud.”

Cooper told Chenoweth that he’d always been open about being gay in the past, when it came to family, friends and coworkers. “It’s just not something I talked about publicly because as a reporter I didn’t think it was appropriate,” Cooper said. “It didn’t seem part of my job.”

“I’ve been torn for a long time between a desire as a reporter to do just do my job. And at the same time, I think visibility is important,” he said — adding that he didn’t “want to send a message that there was anything I was ashamed about or unhappy about or not comfortable with. That was the main thing for me.”

Cooper expressed appreciation for the support and encouragement he received, noting, “I am the same person I always was, I do the job just the same way.”