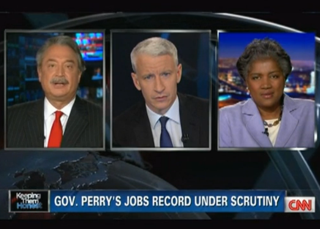 The crown jewel of the Gov. Rick Perry presidential campaign so far appears to be the great number of jobs created in the state during his tenure. On his program tonight, Anderson Cooper splashed some cold water on the claim by showing both President Obama and Perry “created jobs,” but, unlike on a national level, Perry benefited from an extraordinary population growth that created great demand for jobs. “The idea that one creates, the other destroys them is a stretch, at best,” he argued.

Cooper analyzed job statistics tonight on the program to find two major problems with Perry’s campaign claims: aside from the fact that much of the job growth occurring in Texas has nothing to do with policy and everything to do with a large influx of immigrants, the jobs created in the state are mostly government jobs– private sector job numbers are actually in decline. Cooper noted that “Governor Perry is benefiting from certain advantages unique to Texas,” but even in his doing so he was not doing much to live up to his claims that the private sector was the place in which the economy would begin booming.

Cooper also noted some of the help the state received for its relative economic boom: $6.4 billion in federal stimulus money, which did not get rid of a serious budget shortfall in 2009. Cooper brought in Republican strategist Alex Castellanos and Democratic strategist Donna Brazile to parse these numbers, and Castellanos did argued that much of the federal money was taken from the states initially and so Perry had an argument that he was merely asking for money back that was taken from him.

Castellano also added– though as a detriment to the campaign for obvious reasons– that Perry had asked from TARP money from none other than Federal Reserve Chairman Ben Bernanke. On those incendiary comments Perry made accusing Bernanke of treason, Castellanos ceded that “a president is someone who has their finger on that nuclear button,” and comments like that “scare swings voters.” Brazile agreed the comments were a “big mistake” that voters should be concerned about, the panel apparently agreeing Perry’s comments could possibly do more damage than hyperbole on the jobs situation.