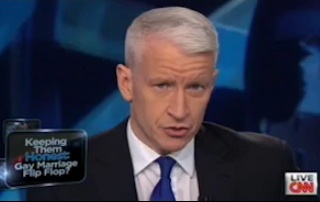 On Monday night’s AC360, in the wake of Vice President Joe Biden‘s comments favoring gay marriage, Anderson Cooper questioned whether President Obama was trying to have it both ways on the issue without taking a concrete stance.

“The President’s position on gay marriage is anything but precise,” Cooper observed. “Mr. Biden said he’s comfortable with the fact same-sex couples are entitled to all the same exact rights, all of the civil rights, all the civil liberties, but that’s not currently the case, even in states where same-sex marriage is allowed, and it’s certainly not President Obama’s position. There’s no federal recognition of same-sex marriage. Therefore, same-sex couples don’t share all the rights heterosexual couples do.”

“Was this Joe Biden just kind of speaking out of turn as Joe Biden sometimes does?” Cooper asked. “Or do you think this is some part of a calculated effort to have it both ways?”

“No, this was not a calculated rollout by the White House,” Yellin replied. “There’s no way they wanted this today. The campaign was intending to have today focused on their new ad campaign framing the election. This was a mess of the White House’s own making…the bottom line is the President has this convoluted position on gay marriage.”