Anderson Cooper Takes On ‘Baffling Case’ Of GOP Flip-Flopping: ‘Why The Fudging Of Facts?’
video

Anderson Cooper Takes On ‘Baffling Case’ Of GOP Flip-Flopping: ‘Why The Fudging Of Facts?’ 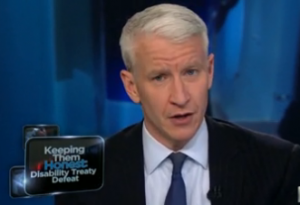 The Senate’s failure to ratify the United Nations Convention on the Rights of Persons With Disabilities was the topic of Anderson Cooper‘s “Keeping Them Honest” segment on Thursday night. Pointing specifically to Republicans, Cooper called out their “baffling case of flip-flopping” and “fudging of facts.”

The measure, which 125 other countries are party to, fell five votes short of the 67 votes needed for ratification — with 38 Republicans voting against it.

“Some of these very same senators actually supported the treaty before they voted against it,” Cooper said, noting that Sens. Roy Blunt, Kay Bailey Hutchison, and Jerry Moran were public supporters of treaty, but “broke their word.”

“Why did they vote no?” Cooper asked. While we can’t know for sure because the senators in question declined to be interviewed, he added, “what we do know is that some powerful conservative groups lobbied aggressively against the treaty.”

Yet they used arguments that, “frankly, didn’t square with the facts,” he continued. “They weren’t true.” As an example, he recalled Rick Santorum, who spoke out against the treaty, saying, “It is outrageous that the government could tell you and me what is best for our children, particularly when they’ve never met the child.”

“But that’s just not true,” Cooper said, pointing to Sen. John Kerry‘s assertion that the treaty “no legal capacity to tell the US to do anything.”

“So why the fudging of facts?” the CNN host asked, adding that Santorum also declined to appear on the show. “We can only guess their motivations, and frankly, some of this is just so baffling that we’d be taking wild guesses, and we just don’t want to do that.”