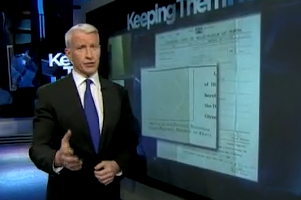 There is a simple brilliance–so seemingly lost in modern cable news–in just doing your homework, and then doing an interview. Monday night on AC360, Anderson Cooper showed off the reporter’s chops he’s known for in the field in an extended–and often heated–exchange with a Texas state representative who questions President Obama‘s citizenship.

Why is the simple act of doing journalism suddenly newsworthy? Because so few news “talents” really get the basics of journalism: researching an issue before you begin an interview, and staying on topic, rather than drifting into the far easier–and to some, more entertaining–area of argument and gotcha attacks. For Cooper, no disrespect at any point, other than to point out gently but firmly that his guest had his facts wrong.

As Thomas Friedman recently observed, this kind of no-time-pressure segment–the interview ran fully fifteen minutes at the very top of the 10 p.m. hour, an eternity compared to some shows–shows how informative and entertaining a talent like Cooper can be: at his best he wasn’t argumentative at all–just deeply informed and ready with facts. At times, Cooper’s ready knowledge of the issue (from the rules and regulations of Hawaiian birth certificates to the protocols for U.S. citizens’ travel to Pakistan in the early 1980s) seemed to catch his guest off guard.

Watching, it’s clear just how often exchanges like this don’t happen on cable television, which given it’s 24 hour cycle would suggest a luxury of time. And beyond that, Cooper’s preparations–so clearly his own and not fed by earpiece–prove he’s somebody who sets himself apart from talking point parrots who populate most other shows on cable.

Watch the interview, from CNN, and put the politics of it all aside. This is a journalist doing his job, and doing it very, very well.