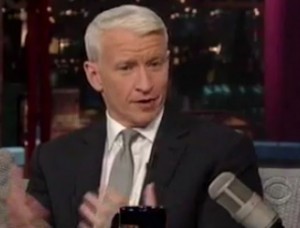 Anderson Cooper stopped by The Late Show with David Letterman on Friday and candidly dished about his thoughts on the Secret Service prostitution scandal. Cooper revealed he has, in fact, “spent a lot of time” in Cartagena, Colombia — though he denied having been to the brothels there.

Letterman was fascinated by Cooper’s revelation, but wary of how dangerous it was to visit the country.

“Yeah it’s totally safe,” Cooper replied, noting that the old city was walled off, with only three entrances and if somebody was kidnapped it could be closed off relatively easily.

Cooper did not hold back in his criticism of the scandal besieged department.

“To me, I ‘m not going to defend anything– the decision that they did, I just find it monumentally dumb,” Cooper observed. “I have met a lot of them, they’re very smart, incredibly dedicated, very hard working so I think it gives a bad name unjustly. But it just seem so moronic, that the guy who did this argues with this woman– allegedly I guess she wanted $800. She stayed the night, apparently, so I don’t know what the going rate is. He argues with her, throws her out of his room, locks her out of his room and she gets hotel security, she gets a local police officer. She doesn’t leave the hallway and it ends up with multiple Secret Service agents, like, pooling their money to pay her off, and the guy who did it won’t leave his room. The whole thing to me just seems so boneheaded– well, that’s probably bad turn off phrase.”

Cooper cringed and adjusted his tie as he realized he had dropped a double entendre.

Watch Cooper’s interview with Letterman below via CBS: