Anderson Cooper Tells Dr. Laura To Follow Her Own Advice And “Stop Whining” 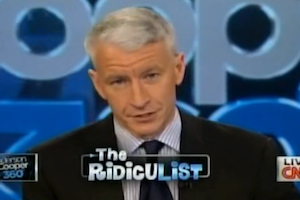 Quite a few people (including, full disclosure, this writer) have taken umbrage with Dr. Laura Schlessinger’s recent media blitz in which she decries the outcry over her little “Saying the N-Word 11 Times While Screaming at a Black Caller on Her Radio Show” incident. Add to that group Anderson Cooper. In addition to being annoyed that Dr. Laura’s attempting to “play the victim card,” Cooper was especially angry that the woman’s decided to drag CNN’s name into the mess.

During her interview with Matt Lauer, Schlessinger accused CNN of having “a field day” on the original story and playing the clip repeatedly for 48 hours without letting her speak for herself. Cooper took some time out of his show to explain that that’s kiiiiiiiiind of not at all true.

First, he showed a video clip of himself from back in August discussing how they had invited Dr. Laura on the show but she had not responded. “Yeah, we save the tapes,” Cooper sarcastically explained. Then he showed a copy of emails sent from his producer to Dr. Laura asking her again to come on the show. And then, for the coup de grâce, he showed footage of an interview from a week later when she actually did go on his show. Yep, that will about do it. Cooper then continued:

“Is this what passes for ‘not talking to me at all’ on Planet Schlessinger? Look, we understand you’re trying to sell a book. We understand you’re trying to boost your radio show. We all know how the publicity business works. But you don’t need to make stuff up. It just makes you look bad. We asked for your side of the story and now we’re politely asking you to take responsibility for the mess you made. Take your own advice and stop whining.”

Again, I’ve already said how I feel about Dr. Laura, but can I just say “Point. Set. Match.”

Check out the clip from CNN below: