Anderson Cooper To Judge: Did Alleged Cop Killer Trick You With Christianity?
video

Anderson Cooper To Judge: Did Alleged Cop Killer Trick You With Christianity? 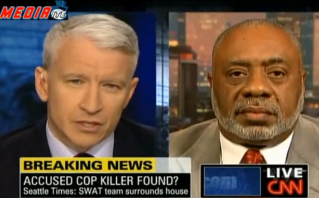 The news that police shot alleged cop killer Maurice Clemmons this morning doesn’t dispel the questions raised by his release. Last night, shortly after former governor Mike Huckabee got a fairly gentle interview on The O’Reilly Factor, Anderson Cooper grilled Judge Marion Humphrey, who had supported Clemmons’ release from prison. Among other things, he asked if Humphrey and Huckabee had been duped by Clemmons’ professed Christian beliefs.

Judge Humphrey was open about his own Christianity from the start of the interview. In response to Cooper’s questions about how a man with such a long rap sheet got released, he had this to say: “this is the Advent season. And one of the things about our lord and savior, Jesus Christ, is that he promoted mercy. And that is a part of the makeup of some of us who serve on the benches, who serve on parole boards, who serve in governor’s office.”

Humphrey hesitated to say that he regretted trusting Clemmons, though he condemned the “atrocity” of the police shooting. At this point, Cooper turned up the heat, asking if the suspect “tricked” Judge Humphrey — and Governor Huckabee — by professing Christian beliefs: (transcript via CNN)

COOPER: Because he does talk about his belief in Christ to — to Governor Huckabee in this.

HUMPHREY: He did not speak of that to me, though.

An uncompromising line of attack? Maybe so, but if Huckabee has future political ambitions (he says he’s leaning against a 2012 presidential run, but who kn0ws), it’s one he’ll need to be prepared for.

In the past, Huckabee’s evangelical Christianity has been touted as an advantage within the Republican party. If his political opponents paint his stance in the Maurice Clemmons affair as naively live-and-let-live, they could potentially twist it into a liability, however fairly or unfairly.