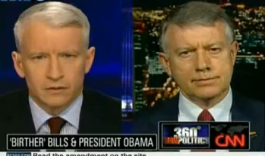 While we wait to see what big news media story will arise to take the place of the Tea Partiers now that they are apparently losing their strangle hold on the airwaves, it seems the Birthers are making a resurgence. Down in Arizona Republicans in the State Legislature approved a bill Wednesday that would require future presidential candidates to show his or her birth certificate in order to be on the state’s ballot (a measure which may turn out to be unconstitutional). Judging from Anderson Cooper’s scathing reaction when faced with the (head-exploding) rational of an actual Birther, in this case elected official Arizona State Republican Cecil Ash who voted for the bill this Birther story probably does not have stamina of the Tea Party meme, if only because it is just too nutty. This exchange between Ash and Cooper, however, is just fantastic. CNN should forget about the Tea Partiers and do a Birther road trip. Behold.

This is Anderson after getting Ash to concede he thinks President Obama is an American…though Ash hasn’t investigated it personally, and you can’t believe what you see on the Internet:

“Well, I certainly would,” says Ash, apparently trying to figure out how not to lose votes and not look like a complete idiot at the same time. “I spoke up on this bill simply because there is a lot of division in the country and I believe this would put an end to any future controversy about a president’s qualifications.” Anderson’s not buying it:

You told our producer you voted for this because you get a lot of calls from constituents with questions based on things they’ve read on the Internet. I mean isn’t it your job as a leader to actually lead? To actually not just throw up your hands and say ‘well who knows what’s real or not on the Internet?’ To say, well, actually, Hawaii has released this information and it’s factually correct?’

It goes on from there. Does it ever. Who knew Anderson had it in him. If CNN devoted more time to this sort of thing I imagine they would not be fending off quite so many dire ratings stories because this is great television.