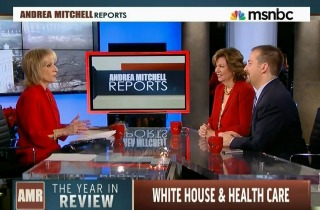 During a year in review segment on Thursday, MSNBC host Andrea Mitchell and NBC News Chief White House Correspondent Chuck Todd began by examining how the implementation of the Affordable Care Act has altered the American political landscape. All agreed that the insurance industry has been unhelpful for the White House by citing the ACA and blaming the President Barack Obama for problematic aspects of the nation’s health care system that he was “trying to fix.”

The discussion began with an acknowledgement of Obama’s diminished status at the end of 2013. Asked how Obama can reverse his waning influence and popularity, Todd said that the ACA must be perceived as a success.

Mitchell noted that the physician community and the insurance industry have not been helpful, with so many doctors opting out of a variety of programs or retiring from medicine entirely “because of the bureaucracy that they’re feeling.”

“Of course, some of these developments are not even related to the Affordable Care Act,” USA Today reporter Susan Page submitted.

“Well, it’s being used – it is clearly, to me, being used by the health care industry to hide bad – to hide unpopular moves,” Todd interjected.

“The White House is being blamed for everything that was already a problem that the White House was trying to fix,” Mitchell opined.

Page conceded this point, but added that the political reality is that Obama will suffer politically for a problematic health care system following the passage and implementation of the ACA.