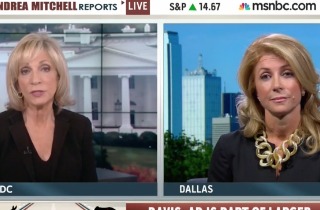 Texas gubernatorial candidate Wendy Davis is under fire for running an ad that goes out of its way to highlight the fact her Republican opponent, state Attorney General Greg Abbott, uses a wheelchair. The idea behind the ad is that Abbott got justice for the accident that left him crippled, but in his career he’s denied others that same opportunity. Abbott responded on Fox News last night by largely taking the high road and saying, “If she wants to attack a guy in a wheelchair, that’s her prerogative.”

Davis appeared on MSNBC today to respond, and Andrea Mitchell really pressed her on whether this was out-of-bounds. Davis said the ad is not about singling the wheelchair out, it’s about Abbot trying to “kick the ladder down” for others in the same shoes as he was, in a campaign she says is “about who he is.”

The Houston Chronicle has an editorial today condemning the “low blow” from Davis. Mitchell brought it up and asked if she could have gone after Abbott’s supposed hypocrisy “without the stark image of the empty wheelchair, which seemed to be trying to point people towards his own disability.”

But Davis repeatedly insisted there’s nothing wrong with her ad, and strongly denied Mitchell’s question of whether this is an unfair “personal attack” on her opponent.