Andrea Mitchell: Israel PM Lectured Obama And Treated Him Like ‘A Schoolboy’ 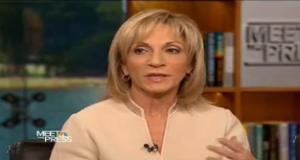 President Obama’s recent speech on the Middle East was highlighted by his call for Israel to return to its pre-1967 borders before the Six-Day War in which Israel occupied land in Jordan, Syria, and Egypt. Obama believes that any meaningful negotiation for peace requires an acknowledgment of those old borders, while Israeli Prime Minister Benjamin Netanyahu believes those borders are indefensible and many Republicans don’t think Israel should have to give up any more than it already has. NBC’s Andrea Mitchell weighed in on the debate and suggested that of all people it was Netanyahu not showing Obama respect.

“It was taken as a red flag by Netanyahu and what happened then was that even if this was implicit in things that previous Presidents had said, Netanyahu seized on it even before he got on the plane – he criticized the President. And in such a fashion, he lectured him in the Oval Office. . . . It was a stone-faced Barack Obama and Netanyahu basically treating him like a school-boy.”

Mitchell went on to suggest that even Netanyahu’s associates thought his tone towards Obama was “really rude.” Just asking, but might it also be “really rude” if a foreign country demanded that we give our land to our sworn enemies so that our new neighbors can then use such land to make their desired goal of our total annihilation possible and much easier? If the answer is yes (as it should be), then Obama (and Mitchell) should be grateful that the President’s naive foreign policy dreams were met with merely a stern “lecture” from Netanyahu and not much more.

Watch the clip from NBC below, and below that, in case you missed it, check out the meeting between Obama and Netanyahu on Friday: