Andrea Mitchell: Obama ‘Bungled’ Relationship With Israel; ‘One Of The Worst Relationships I Can Remember’ 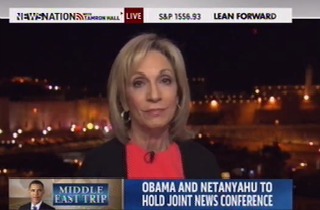 MSNBC host Andrea Mitchell, reporting from Israel as President Barack Obama opens an official visit to the Middle Eastern nation, jabbed at the administration’s handling of bilateral relations with the Jewish state. She said that, while Israelis deserve criticism as well, “none of the independent critics would say that the White House has not bungled this relationship.” She added that the current relationship between the U.S. and Israel is “one of the worst relationships I can remember.”

RELATED: ‘Thank You For Being A Friend’: Israeli Embassy Celebrates ‘Ultimate’ Alliance… Through An Animated Video

MSNBC anchor Craig Melvin asked Mitchell about the nature of the personal relationship between Obama and Israeli Prime Minister Benjamin Netanyahu and how that relates to bipartisan relations between the United States and Israel.

Mitchell replied that the two leaders were not especially close. She said that Netanyahu frustrated relations in 2011 with a “terrible visit” to Washington when he scolded Obama in the Oval Office “to his face.”

“You saw the expressions, they were really – the White House was really offended by that, and it’s taken a lot to repair it,” Mitchell said. “Similarly, the Israelis felt that the position that Barack Obama took when he first took office against Jewish settlements were a real obstacle.”

“None of the independent critics would say that the White House has not bungled this relationship, but a lot of people put blame on the Israeli side as well,” Mitchell continued. “It’s gotten off on the wrong foot and they’re trying to fix it, but it is one of the worst relationships I can remember and I’ve covered every president going all the way back to Ronald Reagan.”