Andrea Mitchell On Men And Sex Scandals: Why Can’t Men Be More Like Women? 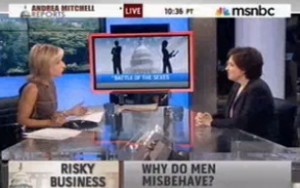 As Congressman Anthony Weiner goes into hiding, there seems to be new angles to the Weinergate coverage emerging. One frequent topic of discussion (or disgust) seems to be wondering why it is that women politicians don’t cheat and don’t have sex scandals? The Washington Post’s Ruth Marcus appeared on MSNBC today and explained to Andrea Mitchell exactly what it is about men that makes it hard for them to stay out of trouble.

When Mitchell wondered “why aren’t men more like women,” in being able to avoid sex scandals and focus on their job, Marcus responded:

Women, by comparison, are more “collegial and consensus building” and can focus on their work without making it about them, according to Marcus. And just in case anyone interpreted that comment from the liberal leaning Marcus as an unintentional compliment to all women in politics, never fear, Marcus quickly exempted Sarah Palin from her praise of women politicians, suggesting Palin is a politician who does make it all about herself.

While Rush Limbaugh gets to blame the frequency of male sex scandals on liberal women, the panel on This Week gets to suggest men with their huge egos need to compete for something, and Marcus here suggests that men have a thirst for attention that can never be quenched, why shouldn’t I throw out a random theory too regarding why female politicians don’t have sex scandals? Here it goes: male politicians, unlike female politicians, tend to be ugly. Why is this relevant? Because ugly men likely never had women really like them until they became powerful. And now that they are powerful they need to enjoy the attention while they can still get it! By comparison, the attractive women politicians got attention before they took office, can still get it after, and are likely sick of it regardless. Therefore, if you really want parity in the gender of your sex scandals, then American voters need to start electing more ugly women to higher office!

Now I’ll admit my theory is not foolproof, yet let’s admit neither are any of the other arguments that attempt to lump Weiner’s troubles into the larger context of male politicians being unable to control themselves and as an ultimate justification for proving men inferior to women. Ultimately my simple suggestion is don’t explain away Anthony Weiner’s childish, embarrassing and pathetic behavior as a defect of the entire male population. It’s not. He’s just weird.