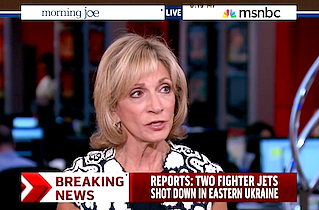 MSNBC anchor Andrea Mitchell has emerged as one of the harsher critics on the left of President Barack Obama’s schedule in the past couple of weeks. Mitchell cited Obama last week after a picture of him playing pool in Denver made the rounds just before his trip to Texas during the border crisis, and then noted on Sunday that his rhetoric on MH17 paled in comparison to his U.N. Ambassador.

Mitchell continued on this note Wednesday morning, chiding the president for failing the “optics of leadership” by continuing to golf and fundraise following the downing of flight MH17.

“This isn’t politics, this is the optics of leadership,” Mitchell said on Morning Joe. “The golf course is not the best place to be, even though you don’t really see him out there. But the fundraising, those trips are being questioned for a good reason. You know, the trips last Thursday when the Malaysian airliner was shot down, proceeding to Wilmington and then proceeding on to New York for two fundraisers, that’s all being questioned by people.”

“Ronald Reagan is being praised for coming back from California when the Korean airliner was shot down by the Soviets in 1983,” she continued (a-HEM). “That was only after he was criticized in 1981 for staying on vacation and for having his top aide, Ed Meese, come out and say the president was asleep but he’s always in charge. So they learned their lesson and fixed it the next time around.”