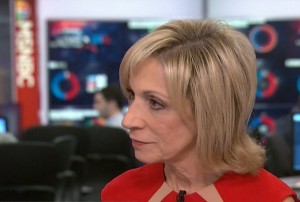 Now that Ted Cruz and John Kasich have both dropped out of the Republican presidential race and Bernie Sanders is playing out the string, the mainstream media narrative around the Donald Trump versus Hillary Clinton general election matchup is beginning to gel. On MSNBC’s Andrea Mitchell Reports Wednesday afternoon, host Andrea Mitchell made it clear that not only will she promote Trump’s candidacy against Hillary Clinton, she will do so in defiance of the facts.

In an interview with senior Hillary Clinton strategist Joel Benenson, Mitchell said that Trump “can draw some traditional Democratic votes with that same economic populist message that Bernie Sanders has used,” and presented that absurd claim as her own analysis. Mitchell went on to opine that Trump supporters “associate him with job creation, even if he isn’t associated with job creation,” and added that “We’ve discovered in the last months is facts no longer matter. Tweets matter.”

Let’s ignore, for a moment, that Andrea Mitchell is parroting a Donald Trump talking point as her own analysis, and just focus on her assertion that facts no longer matter. Isn’t there some group of people out there in the world who is tasked with ensuring that facts do matter, and is that group of people the same group that is instead devoting most of its time and energy to uncritically broadcasting Donald Trump’s fact-free messages?

We’ve already established that the mainstream media will place its thumb wherever it has to in order to keep things close between Hillary and Trump, but Mitchell’s “observation” that “facts no longer matter” is nothing short of a declaration of war on the public she’s supposed to be serving. Make facts matter!