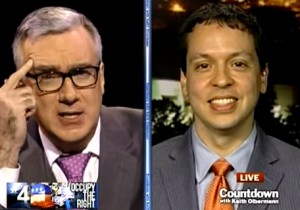 Andrew Breitbart and his Big Journalism colleagues have been waging all-out internet war on Countdown host Keith Olbermann over his failure to correct (or clarify) guest Markos Moulitsas‘ comments on sexual assaults at Occupy encampments, and for statements Olbermann has made on Twitter since then that seem to indicate denial that any such assaults occurred. While there is serious, legitimate criticism to be made of Olbermann here, the Breitbart crew undermines that with overreaches and lies.

The controversy centers around this segment from Monday night’s Countdown, pegged to Andrew Breitbart’s “Stop raping people!” rant at CPAC, in which Markos Moulitsas said, of the Occupy movement, “They can be as filthy and rape people — if you want to make stuff up — but the fact is, nobody really cares about it because that message isn’t about the messengers, it’s not about who’s delivering the message, but the message itself, which really resonates at very core, emotional level with people who are suffering in this economy.”

What Moulitsas likely meant was that the notion that sexual assault is widespread in, or somehow representative of, the Occupy movement, but without clarification, it sounded like a blanket denial that it had occurred at all. While Olbermann himself didn’t mention the sexual assaults, he failed to correct Moulitsas, or allow him to clarify.

Olbermann also later tweeted “Love this. @AndrewBreitbart goes nuts, hallucinates about some imaginary wave of rapes at Occupy, & a bunch of guys w/no necks Tweet-grunt,” and “@TheHenry No Occupy rapes, no cover-up, no apology, no retraction, and no credibility for your Moonie-owned ‘newspaper.'”

Giving Olbermann the benefit of the doubt, based on his later tweets, he meant, respectively, that the sexual assaults reported at Occupy camps did not constitute a “wave,” and that those assaults could not fairly be characterized as “Occupy rape.” He went on to point out that the assailants were often outsiders, while the victims of the crimes were Occupy protesters. The counter-argument is that he was just back-stopping his earlier errors.

Not helping Olbermann get the benefit of the doubt here is the fact that he has a history of this sort of thing, having helped touch off a massive social media protest over his treatment of rape allegations against Julian Assange a little over a year ago. Either way, though, he had a duty to stop Markos when he said “if you want to make stuff up,” and asked him to clarify, or clarified for him. His later Twitter clarifications were whispers. If he didn’t have the time to devote to a proper discussion of the issue, he shouldn’t have pegged his segment to it. Olbermann ought to devote a segment of his show to the complex subject of sexual assault at the Occupy Camps.

Andrew Breitbart and his Big Journalism website jumped all over the issue, pumping out blog posts and tweets demanding a retraction and apology. If they had confined their activities to this, we could all be singing Kum Ba Yah right now. Rather than acting out of genuine concern for these rape survivors, or for awareness of sexual assault, it is apparent that the real mission here is to exploit the rapes to score points against Olbermann and the Occupy movement, to spread exaggerations and lies about the Occupiers, and, as Andrew Breitbart has made abundantly clear, to balance the scales for the much-maligned Tea Party.

Big Journalism is exploiting their outrage to promote what Andrew Breitbart admits is a score-settling smear against the Occupy movement, and to spread lies and exaggerations about it. The sheer volume of “reporting” by Big J on this issue makes a really thorough fisking somewhat impractical (there’s an idea for a Countdown segment), but it’s fair to say that if there are several pieces of steaming BS right on top, they haven’t really earned any further consideration.

Exhibit A: Breitbart blogger Lee Stranahan asserts, in his Olbermann-shaming blog post, that there has been a pattern of Occupy protests covering up rapes. He offered, as evidence of such a “cover-up,” this video, misleadingly titled “Sexual Assault: ‘nobody should contact the police’.”

Exhibit B: Stranahan cites, as evidence of a cover-up, a story in which the victim of a sexual assault decided not to alert police.

Exhibit C: Stranahan lists two separate stories, from Boston and Baltimore, about an Occupy pamphlet that actually said sexual assault survivors have “every right, and the support of” the Occupy movement, to contact the police. It also said, ill-advisedly, that “we do not encourage the involvement of the police in our community.”

That’s really bad, and a stark misplacement of priorities, but it ain’t a “cover-up.” The other problem? Both stories were about the same pamphlet, in the same city: Baltimore.

The remainder of his list consists of a dead link, a NY Post story that says nothing about covering up sexual assault, and a YouTube from a Canadian Occupy camp, in which protesters demand better handling of sexual assault incidents. All of this could be great fodder for a discussion of how sexual assault is handled in these settings, and in our broader society, but they aren’t evidence of some breathless “cover-up.”

The most disturbing thing, though, was the video that Dana Loesch embedded in her Olbermann takedown. The young woman in the video talks about the assaults at her camp, and explains that the Occupy organizers urge victims to alert the police, but that the police refused to take any action. She also described efforts, much like the ones we reported here, to make the encampments safe from the predators that the police ignored, to stand guard over people as they slept. These are the people that Andrew Breitbart called “filthy animals” and told to “Stop raping people!”

I could probably stomach all of this twisting and stretching if it was in service to an overly zealous concern over rape and rape culture, but that’s clearly not the case. If Big Journalism’s explicit attempts to discredit the Occupy movement by exploiting these crimes isn’t apparent to you, consider what they didn’t write. Did they utter a single syllable over Liz Trotta‘s dismissive “Women are raped too much” comments this week? Did they ever write anything about Jamie Leigh Jones, who inspired Al Franken’s rape amendment?

When Catholic organizations were bleating about their consciences last week, did Andrew Breitbart stand up and tell them to “Stop raping people?”

Actually, Big Journalism did post one piece about the Pope’s complicity in the Catholic church’s long, shameful history of enabling the rapes of children, decrying the New York Times‘ “harsh attacks” in “its war with Pope Benedict XVI.”

Rape is a serious subject, and Keith Olbermann was dead wrong not to treat it as such. At the same time, Breitbart’s admitted exploitation of this issue is cheap. I can’t wait to read Big Journalism’s article on that.