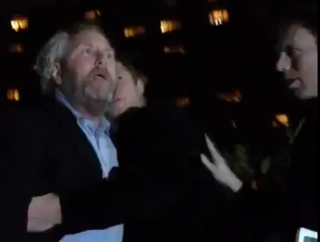 Perhaps moreso than many of the conference’s guests over the years, Andrew Breitbart has emerged as a uniquely revered figure at CPAC, partly for his ability to work the CPAC crowd over the job President Obama has done while in office. But much of it has to do with his work at CPAC outside of his speeches– his support of diversity in the conservative movement, his ability to engage just about anybody. Last night, Breitbart walked outside the hotel hosting the conference to attempt a chat with irate Occupy protesters, demanding they “behave yourselves” and “stop raping people.”

While there is a great deal of yelling going on in this video, Breitbart sticks to a few main sentences: “behave yourselves,” “you are freaks and animals,” and “stop raping people.” Meanwhile, some of the protesters can be clearly heard launching profanity at him until someone starts a chant of “racist, sexist, anti-gay; right wing bigots, go away.” Finally, the police show up and shield Breitbart from the crowd.

For those sympathetic to the Occupy movement, the image of Breitbart being held back while yelling the same sentences over and over at a somewhat bewildered crowd will resonate as more evidence that Breitbart is angry and not worth listening to. For those on the right, it will confirm exactly why they love him– he expresses absolutely no fear in standing before large crowds of people that view him negatively and telling them what many people have written and said in the safety of their homes: that many Occupy “camps” have serious problems with sexual harassment and unreported rape, that it is often entirely unclear what they are protesting; that ambiguous protests are annoying; that their image is sometimes aesthetically unappealing. This exchange isn’t really going to change anyone’s opinion on anything, but it is certainly a dramatic and inevitable confrontation of protest movements in the country.