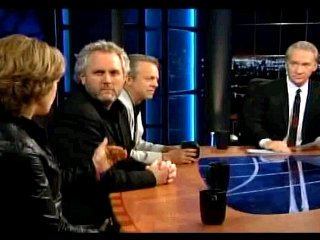 It didn’t take long for those sparks to fly, either: almost immediately after Breitbart defended himself saying he once told “a very prominent conservative” to “stop it with the birther crap,” Flanders jumped right on him: “You’re like the guys who set the fire and then condemn the place.” Soon, it moved on to Flanders trying to get Breitbart to apologize to Shirley Sherrod – she didn’t get what she wanted on that one, either. We did, though, get Breitbart saying once again that Glenn Beck threw him under the bus, saying he “cut up the video” to make Breitbart appear unfair…and we even got a positive shout-out from Breitbart to Chris Matthews on top of that.

It continued along those same lines – Flanders calling Breitbart “a con man,” Maher finally trying to turn the discussion back to Donald Trump (he’d wanted it to be about Trump from the beginning), and debate over Obama’s writing, scholarship, and former hairstyle. Oh, and Republican strategist Mark McKinnon was there, too, but he didn’t get to say much.

At the end of the clip you’ll see below, Maher says, “I think we’ve all had a chance to voice our opinions.” In the cases of Breitbart and Flanders, at least – yeah, we’ll say. Video via HBO.