Andrew Breitbart To CNN’s John King: “I Did Not Fire Shirley Sherrod” 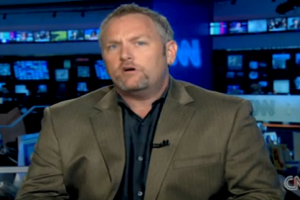 The Shirley Sherrod saga continues, with this round being fought on the unlikely ground of CNN. Andrew Breitbart was a guest on an unusually spirited episode of John King, USA tonight, standing his ground that the story is the NAACP and not Sherrod, and that he did not want to see Sherrod fired.

In what was probably the most contentious discussion in the history of the show, John King took a stab at debating Andrew Breitbart and holding him accountable for releasing the tape that got Sherrod fired. Breitbart extensively detailed why he believes the story is exclusively about the NAACP and not about Sherrod’s case specifically: “this tape is about the NAACP. It’s raison d’etre is about non-discrimination. And when Shirley Sherrod is talking there, in which she expresses a discriminatory attitude towards white people, the audience responds with applause and the NAACP agrees with me. And it rebuked her and the audience.” He also says there are more tapes coming up, with even more racism, and that despite the NAACP agreeing with Breitbart on this point, the Sherrod case in the tip of the iceberg.

King challenged Breitbart on the point that the Sherrod tape was taken out of context, and that it is, in large part, Breitbart’s fault for releasing the tape that she lost her job. “I did not ask for Shirley Sherrod to be fired,” he repeated several times, “I did not fire her.” He also responded that he thought “she should have the right to defend herself,” but whenever King brought up the fact that the tape was posted on his website, Breitbart repeated, “This is not about Shirley Sherrod.”

At another point when King questioned Breitbart’s methods, Breitbart turned on him and CNN, skeptical of whether the fact that the story Sherrod tells happened two decades before, as has been affirmed:

“If it is the case and it can be shown to me that the incident that she’s talking about was done many years ago and not in her current context — but as a reporter, you tell me how you confirmed that the incident that she’s talking about was 24 years ago. You tell me as a reporter how CNN put on a person today who purported to be the farmer’s wife. What did you do to find out whether or not that was the actual farmer’s wife? I mean there has– if you’re going to accuse me of a falsehood, tell me where you’ve confirmed that this incident happened 24 years ago?”

King and Breitbart also grappled on whether King and CNN have called the Tea Partiers “racist,” which King vehemently denied doing, and Breitbart eventually shifted from “CNN” to the “mainstream media.”

On a scale of his appearances on Red Eye to his legendary shouting match with David Shuster, this was a combative but fair Breitbart interview. It was clear that King was afraid of pushing so many buttons that the conversation would be completely counter-productive, but was keen on not letting some of his suspicions slide (some, like our own Tommy Christopher, have not been as generous with King, but his show is simply not meant to be a venue for shoutfests, which is what any more prodding than he managed to do would have created. As for Breitbart, he is going to have to answer to some extra “snookering” before he can evaluate this performance.

The full discussion from CNN’s John King below: