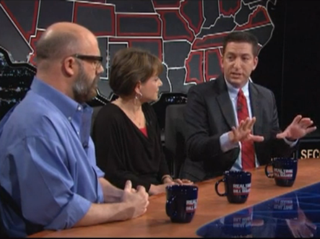 As often happens on Real Time, Bill Maher‘s panel got pretty heated last night over the killing of Anwar Al-Awlaki and, with Glenn Greenwald on board, could you expect anything less? Greenwald and Andrew Sullivan went at it for a bit, with Sullivan defending the Obama Administration’s decision to kill him and, somewhat surprisingly, Maher jumping in to defend Sullivan’s argument.

Maher began the discussion on al-Qaeda terrorist Anwar Al-Awlaki and noted that while he did agree that Al-Awlaki was a bad guy, “it’s kind of disturbing that the president can kill an American citizen just with his say so.” “On the other hand,” he pondered, “how else are we supposed to get him… tell him he won the lottery and wait for him to show up?”

Greenwald was the first to respond, suggesting that the evidence that he was doing more than giving speeches was, to him, not foolproof. What’s more, “the problem becomes when the government simply accuses people and the President decrees them guilty.” Sullivan responded with the fact that there were people who had to go into hiding “because of threats of violence against them in this country because of this guy,” so the rhetoric was far beyond a political opinion, but a threat. Greenwald fired back that the greater problem was trusting the office of the executive on such decisions. “If for whatever reason you trust Barack Obama, the benevolent constitutional scholar… do you trust that power when it is vested in Michele Bachmann or Newt Gingrich or Sarah Palin?”

The two argued for some time over whether the threat of someone who was a member of a foreign militia in a time of war was significant, interrupted by the third panelist, Wendy Schiller who sided with Greenwald. “We can’t take the moral high ground when you go around killing people,” she argued. Sullivan helpfully reminded her the killing was due to the fact that “this is a war, where you kill people,” and Maher jumped in on Sullivan’s side. “Don’t you think when you move overseas to Yemen and start preaching against Americans and having communications with terrorists, that you sort of should give up your American citizenship?” The argument continued, and Maher found himself the moderate on the panel, suggesting some oversight (“a death panel?”) for the President, but not a full-blown trial.