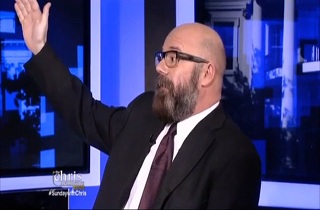 On the Chris Matthews Show Daily Dish publisher Andrew Sullivan declared that many of the cardinals picking the next pope are gay and that gay marriage will not be a factor in their voting.

Matthews opened the segment pointing to a poll showing a majority of American Catholics now support gay marriage. Some of the panelists speculated that this has more to do with the libertarian streak of the country.

CNN’s Gloria Borger and The Washington Post’s Kathleen Parker both agreed that it had more to do with changing demographics and a greater acceptance of gays and lesbians among young people.

Matthews asked Sullivan if these changing sentiments among lay Catholics will have an impact on the selection of the next pope.

Sullivan said no and then added that many of the cardinals are actually gay, prompting chuckles from some of the panelists off screen.

“There are so many gays electing the next Pope that who knows whether that would happen,” said Sullivan, talking about a topic he has written about before.

“You mean the Cardinals?” a startled Matthews interrupted.

Sullivan noted that the the only religious group in the United States that still opposes gay marriage in large numbers is white evangelical Christians. Sullivan contended that continued opposition to gay marriage by evangelicals will kill them off the way it has hurt the Catholic Church.

Earlier this month Sullivan speculated that Pope Benedict XVI was in a gay relationship with one of his assistants.