Andrew Sullivan Talks Republicans On CNN: ‘I’m Still A Conservative, And They Are Not’
video

Andrew Sullivan Talks Republicans On CNN: ‘I’m Still A Conservative, And They Are Not’ 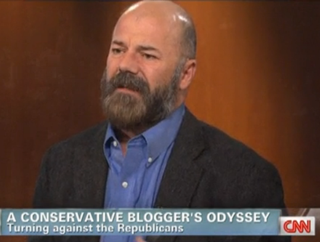 Andrew Sullivan spent a good deal of his morning on television today, following up an appearance on The Chris Matthews Show with an extended interview on Reliable Sources, where the blogger discussed moderate conservatism and his increased alienation from the American right with Howard Kurtz. Sullivan insisted that, despite praising President Obama and, on some issues, falling in the Ezra Klein/Thomas Friedman column, he was still a true conservative.

Kurtz began the interview by commenting that Sullivan had been “vitrolic” towards many conservatives lately, and asking how he reconciled that with his own politics. “Because I’m still a conservative and they are not,” he argued, suggesting that the idea that “the government should be exploded, destroyed” was not conservative, if the word was defined as “liking the status quo, as wanting it to be limited government but understanding that there are two parties in the system, a little give and take.”

They then turned to individual conservatives and Sullivan’s comments on them. Take, for example, Newt Gingrich, who Sullivan called a “narcissistic know-nothing blowhard.” “This is somebody who could never get tenured at not a terribly distinguished college and never actually managed to publish any paper…” Sullivan argued, “and yet he is routinely introduced on this network and other networks as a historian, an intellectual.” He attributed this to media laziness, as well as the continued existence of a Herman Cain primary campaign that was actually competitive. In the Cain case, however, Sullivan argued he was more than annoyed, but “kind of offended” that the idea that “abuse of women in that kind of professional way is kind of disqualifying” wasn’t in operation with Cain.

Kurtz once again returned to Sullivan’s personal politics, which the latter defended as conservative by pointing to the conservative government in the UK and lamenting the quality of candidates in the 2012 Republican race– “then there is a quality candidate like [Jon] Huntsman, who is completely ignored.” The entire 2012 race, he concluded, was “pathetic” on the Republican side.