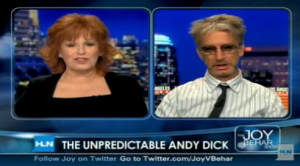 When Joy Behar brought the comedian Andy Dick on to discuss Lindsay Lohan’s incarceration, she was clearly planning on having a light, jokey conversation. However, while the chyron at the bottom of the screen identified him as “The Unpredictable Andy Dick,” Dick ended up being most unpredictable is just how serious he was, giving a sobering discussion on his own problems with substance abuse, rehab, and jail. Behar initially tried to bring things back to the light side (she attempted an awkward joke about alcohol SCRAM anklets rusting), once Dick began telling stories about Robert Downey Jr. leaping over the rehab wall so he could smoke crack outside, there really wasn’t any turning back.

The conversation clearly started its left turn when Behar asked Dick if the drug problems he and Lohan have had might be a good thing since it keeps them in the headline. Dick was obviously insulted and spent the rest of the interview pointing out why it most definitely is not. His anecdotes were dark, cynical, and sincere, a very different side than most people see of the manic funny man who’s had no problem with self parody in the past.

On the Joy Behar Show’s website, their promoting the piece as the show’s “most bizarre interview yet” (um, have they completely forgotten about Louis C.K.?), but “bizarre” isn’t really the right word at all. A much better word would probably be “sad.” This segment works as a good reminder that, while some people may get a schadenfreude kick out of seeing stars like Lohan fall, there’s really nothing too funny about a drug addiction.